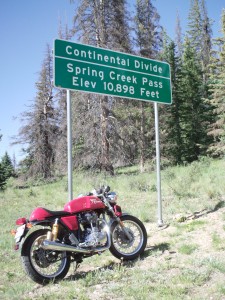 What do you think of when you see a dude walk into a room with a burnt boot heel? Maybe he is a phenomenal salsa dancer? Maybe the guy even likes to Flintstone his way to work? OR maybe this lucky dude has a Royal Enfield Continental GT? BINGO! This story is about Tom, the guy who rode his GT from Lake City, Colorado to Fort Worth, TX. Oh and he camped out the entire trip. Two days and 16 hours later Tom rolled in from Colorado with the shakes of a true thumper, the kind of shakes you get from doing 845 miles on a single cylinder motorcycle. His Royal Enfield isn’t the only motorcycle he owns but it was the only one he wanted to take on his voyage. 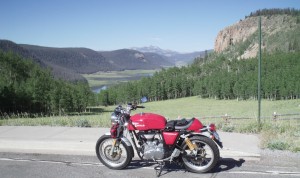 The Continental GT is newest Royal Enfield model. It is a true Café Racer! With that said it doesn’t accommodate storing baggage or even offer a real comfortable ride. This is probably one of the most comfortable Café Racers on the market, but you have to remember they are not supposed to be comfortable, or else it wouldn’t be a Café. Next time you see a guy on a Café just know his back is knotting up, his arms are numb, but also remember this guy is having the time of his life. I can’t even imagine riding a GT from Colorado to Texas, but Tom definitely did. “Every 30 minutes I had to change riding positions. I even installed wooden dowels on the back so I had something to prop my legs up on” (Tom). It’s easy to think to yourself when the ride will finally come to an end. When the tiny flying rocks, body pains, and the bad weather will finally stop. To forget why you are even riding the bike to begin with. “I never had a doubted if the bike would make it, I doubted if I could make it. When I left Colorado it was 27 degrees, when I arrived in Fort Worth it was 92 degrees. There is no way to prepare for that!” (Tom). 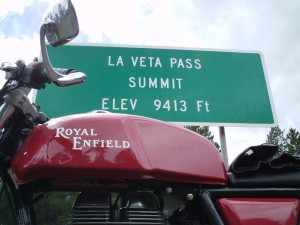 So why did you choose the GT for this ride? “I own other bikes, I have owned over 100 motorcycles from all over the world; Britain, Mexico, Spain, Japan, Germany, etc. I have had the most fun on this motorcycle! It’s not the fastest or biggest, it’s not the most comfortable, but the styling is spot on! It will even burn a hole through your right boot heel if you’re not careful” (Tom). Depending on your sitting position on the bike, your right foot may experience some heat which forces the riders boot on top of the up-sweep exhaust. I have heard numerous complaints of this so-called “problem”. I would take it as a badge of honor! At least that’s how Tom feels about it. It’s those tiny quirks that make Royal Enfield so special. If they fixed all those not so big problems it wouldn’t be such a fun motorcycle to ride. 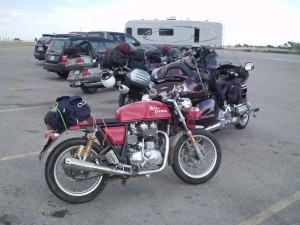 I then went on to ask Tom what the best and worst part of the ride was. “The worst part was that it took me 3 times longer than any other motorcycle to fill up for gas…everybody wants to stop you and ask about the bike. Well I guess that’s not so bad. The best part is that my GT sparked so many smiles and laughs along the way.

So Tom, after your 2 days and 16 hours were up, what’s your one word to describe Royal Enfield? “Fun. It is such an enjoyable motorcycle to ride. I was able to ride my Continental GT across the Continental Divide! Riding my GT through Spring Creek pass is something I will never forget”. Tom, may the hole in your boot run as deep as your passion for Royal Enfield motorcycles!