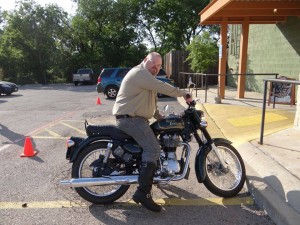 It was over two years ago when Joel’s life would never be the same. He finally took the jump and purchased a 2011 Royal Enfield British Green G5. Joel didn’t waste any time getting to know his Enfield, since 2012 he has put over 8,500 miles on his bike. “I wanted a motorcycle for over 20 years and I finally took the plunge. I turned 40 and realized I needed to do it now. You see the world differently on a motorcycle. For instance, riding by a restaurant you can smell the food they are cooking up. If I was in the car I would have never pulled over to try this new restaurant” (Leggett). It’s interesting to hear the different reasons for why people ride. Joel’s reason is that he wanted to see, hear, or even smell things like he has never before. “On a Royal Enfield you take the back roads. You can’t be in a hurry, you’re going to see things you have never seen before. In other words, you’re going to have a f***ing good time!” (Leggett).

So with over hundreds of motorcycle choices on the market, why did Joel choose a Royal Enfield as his motorcycle? Joel’s answer was easy, “It’s different. People always want to stop me and ask questions about it. The first question is usually, ‘did you restore it?’. The funny thing is not only did I not restore it but I haven’t had to do any major repairs at all”. He goes on to explain why he choose a mid-size motorcycle, “big bikes are ok, but if you just want to get down the road to get a cheeseburger a Royal Enfield is perfect! I’m not fancy, I just want a vehicle that works and is different”. I don’t think that’s too much to ask. Joel summed up his purchase decision perfectly when he said “I didn’t want to be another middle-aged white guy getting his first Harley”. 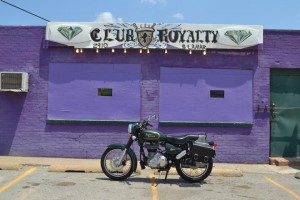 Joel stumbled upon Royal Enfield’s by searching online for retro motorcycles. “After searching for a vintage motorcycle, I realized a restoration wasn’t the right bike for my first motorcycle, so I choose a Royal Enfield” (Leggett). How many more Enfield riders would we have if they only knew the brand existed? What if Joel never found RE online? On the other side of the coin, how cool is it to ride a motorcycle not everybody has or even knows about. It’s such a rich story to share with total strangers, and since human interaction is the core of our existence how appropriate is it to own such an approachable motorcycle.

Joel is one cool cat! He tells it like it is, he doesn’t have a bullsh*t filter. I can respect a dude like that. He lives a simple life and explores it through his simple motorcycle. “It’s been a blast. My only regret is that I wish I would’ve done it 10 years earlier. My one word to describe Royal Enfield is HERITAGE. Royal Enfield has been making motorcycles for over 100 years. They are hand crafted, mass produced, and built to look old but aren’t. It’s just you and the motorcycle”. Beautifully said, Joel! I look forward to seeing Joel in two years with 17,000 miles on his British Green Royal Enfield. Ride on buddy!