I hope you’re all ready for this one! Rod Copes himself gave me a few minutes of his time for an exclusive interview for Enfield Rider. Royal Enfield of Fort Worth and I could not have been more excited to have Mr. Copes visit the shop to discuss his plans with Royal Enfield. Rod Copes (leader for expansion in the US and Canada market) comes from a Harley background where he led the global customer sales and service. Obviously the first question I asked him was, “Do you see any similarities between Harley-Davidson and Royal Enfield?” He responded with “Royal Enfield is where Harley was in the 90’s. They have made it through the tough times and in the 90’s the brand (HD) took off, resulting in demand exceeding supply. Royal Enfield has experienced the same thing during 2010-2011. We are going from a small company to a bigger company, now we must ramp up manufacturing capacity, new product development, company service, and quality of product, all simultaneously. And as you may already know, this can be very chaotic for all parties involved.” This “ramp up” has a lot to do with the new factory built in Chennai India. “During the initial phases of the new factory, Royal Enfield had the capacity for 250,000 units/year, however they found out quickly they needed to ramp up that capacity. By the end of next year, Royal Enfield will have the capacity for 500,000 units” (Copes). The thought of 500,000 Royal Enfield’s being built in one-year makes me want to tear up with excitement, welcome to the big league boys.

As we all know by now, Royal Enfield motorcycles are built in India, but what percentage of Enfield’s are sold in India you ask? Well good thing Mr. Copes is here to answer. “About 98% of RE’s are sold in India. Now the plan is to invest in new platforms and new product offerings, ranging from 3-5 new platforms while staying true to the middleweight class” (Copes). Anytime a company manufactures and sells 98% of its product domestically, the employees must switch their mindsets to a broader outlook. “When Royal Enfield sells globally the employees mindset must change. This is similar to what Harley had to realize in the early 2000’s, they had been opportunistically selling outside the US and now (being early 2000’s) they must do it better. But it’s not just about the Royal Enfield customer in India, this mindset change includes things such as growing brand awareness and keeping product quality up throughout all the new markets” (Copes).

Before launching these “new platforms”, Rod Copes explains why creating Brand Awareness is so important. “In 2014, we focused on the launch of the GT. For 2015, we will focus on Brand Awareness. We must explain that Royal Enfield is the oldest motorcycle brand in the world, and it has such a great story! Now how do spread the story? We must build a foundation so when new products are introduced people understand what it is” (Copes). He goes on to explain some of the long and short term goals for the company, “Our goal is for Royal Enfield to be the largest mid-size motorcycle company in the world, and with the growth in the US and Europe we hope to see that within the next few years. Establishing a good relationship with the dealers and consumers will be a major part in this growth being successful. It is important to note that we are continuing to work very closely with our long-standing US distributor, Classic Motorworks.  Classic Motorworks has done a great job of building the Royal Enfield brand in the US market over the past 16 years.  We appreciate their marketing, sales, and client service efforts, as well as the strong dealership network that they created”. 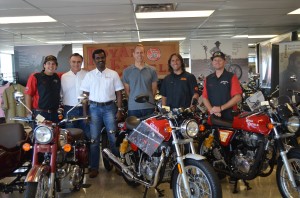 So you might be wondering, does Rod Copes ride? Bet your ass he does! Not only does he ride, but he rides the Continental GT! “I want a whole stable of Royal Enfields!” (Copes). And when I asked “will that stable include a 350 Scrambler”, with a smile and a laugh Mr. Copes replies with “I cannot comment”. I asked this question because recently, a few articles came out spreading rumors of a possible Royal Enfield Scrambler in the mix. Now you must remember these are RUMORS, and nothing has been confirmed or disconfirmed from Royal Enfield. This company keeps secrets as tight as Apple computers.

Now that the numbers and rumors are out of the way, let’s get down to why people love Royal Enfield. Under ‘The Rider’ section, I included this quote from Bruce Lee, “One does not accumulate but eliminate. It is not daily increase but daily decrease. The height of cultivation always runs to simplicity”. In my opinion, Bruce Lee sums up Royal Enfield perfectly. After showing this to Mr. Copes, he responds with “that’s it! That’s the essence of what Royal Enfield stands for. That’s what we call pure motorcycling. Our theme is to get people back to ‘pure motorcycling’. It’s one with the man. It’s taking the rider back to the day of the 60’s where it was so minimalistic and simplistic. It’s back to just a motor and seat” (Copes).

After every interview I like to ask the interviewee to sum up Royal Enfield in one word. Mr. Copes responded with “I’m going to use two, Pure Motorcycling”. I could not have summed up Royal Enfield any better, and I think the Royal Enfield team will benefit a great deal with Copes joining us. He sees the vision and the limitless possibilities for our growth, “I have the best job in the world” (Copes).

Fasten your helmet straps ladies and gentlemen, we have an exciting ride ahead of us!