New Yellow Continental GT In the US 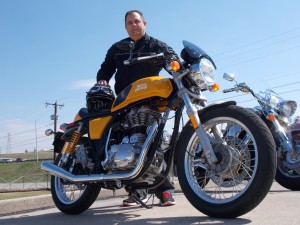 Late 2014, Royal Enfield came out with only 6 yellow Continental GT’s. ONLY 6 for 2014! This write up is for the very lucky Fred Bandy. For those of you who believe in love at first sight, this is what happened to Fred when he walked through the front door of Royal Enfield of Fort Worth, “I had to have it”. Fred lives to be different, “My own entity. I’m always attracted to something different”. Before he left the lot, he installed the D&D upsweep exhaust pipe, stage 1 breather kit, fly screen, and bar end mirrors, giving the Café Racer a whole new look!

A lot of hype has been surrounding the Royal Enfield brand for the last couple of months, it seems that everyday a new article or interview is released. In my opinion, it was a great move to offer only 6 yellow 2014 Continental GT’s. A sense of urgency was created with the low supply of yellow Café Racers and the demand rose through the roof, positioning the company perfectly for the upcoming 2015 year. Fred is now part of history, he is now one of only six who had the opportunity to purchase the limited edition yellow 2014 GT.

When Fred walked into the RE shop he was looking to start his own Café Racer build. Fred once stripped a Puch Motorcycle down to the frame and built it right back up. When he saw the new GT, he immediately thought of his old Puch he wrenched on for hours upon hours in his old garage. Royal Enfield motorcycles tend to bring back priceless memories from the old motorcycle past. Lucky for Fred he bringing back his own priceless memories as we speak!