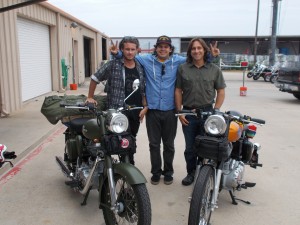 One of the biggest concerns I hear from customers, before they purchase a Royal Enfield, is the challenge of riding on the highway. In the DFW area, where we are surrounded by busy interstates, 18-wheelers go flying by you at 80 MPH. I don’t know about you but when the highway starts getting crazy I want to know that my motorcycle has enough pickup to get me out of trouble. Over the last weekend two buddies and I embarked on a trip to the rad city Austin, TX. Two of us were on Royal Enfields and the third guy rode a 48 Harley Sportster (he had a little more motor on us). For the ride there we decided to take 281, which was an absolute killer ride. Our average speed was 70, every once in a while I would run it up to 85, just to get the old kicker going. Even though I have over 10,000 miles on my Royal, it still amazes me with how much torque it has. 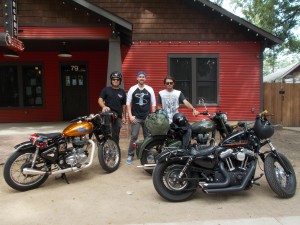 Every 5,000 miles it seems to transform into an even better ride, completely different from the first time I rolled it off the lot. When you’re red lining a Royal Enfield, you know you’re riding a real motorcycle- a true motorcycle of character and wisdom. It’s unlike any bike I have ever ridden. So when the rocks, bugs, and sweat are rolling off my face, I can’t help but wish the ride would never come to an end. Not one time during our 5 hour ride to Austin did I wish for it to end. There is something special about being on a motorcycle next to some good friends on theirs. I don’t know when we will ever be able to do it again, and that’s all the reason to seize the moment and ride like it was your last. And if my Royal Enfield was the last bike I ever got the opportunity of riding, then I think I would be ok with that. Point of the story is, the Royal Enfield is a highway, city, and off-road kind of motorcycle. To my kind mates, Austin (Sportster) and Michael (Military Enfield), thanks for the killer ride!