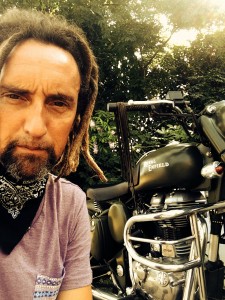 Who here has ever purchased their first motorcycle and ran over 35,365 miles on it in three years? Clay Britt is that guy! His Enfield is his daily commuter to Austin (over 100 miles a day), where he works as a landscape architect. “Austin is a perfect place for my Royal. It’s the kinda place where everybody wants to be different and efficiency is the name of the game”.

Clay doesn’t classify himself as an “Average Rider”, this isn’t just some weekend ride, this is a rain, snow, sun, and mud kind of ride! “I didn’t want something to big, I wanted a bike no one else had. I fell in love with the Military green color and dreamed about it for over a year. A lot of research went into Royal Enfield before I made the decision to purchase”. Once Clay started researching the brand, he saw how “the romance with the Royal Enfield comes from the long and lustrous history backing the brand from 1901”. 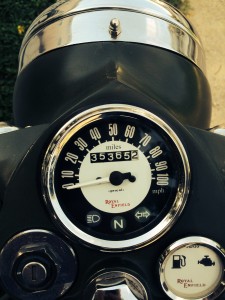 After 35,365 original miles on Clay’s bike, surely he had something he would like to change about it; “THE ELECTRONICS! Today my horn stopped working, tomorrow it might start working again. One day I might replace all the wiring. I don’t get mad when something doesn’t work or breaks on my Enfield, I know what it is and I accept what it has to offer, it’s a classic ride”.  Clay’s Royal Enfield isn’t the only motorcycle he owns, he also has a 2001 Kawasaki W650 (super retro and cool). “The 650 was surgically engineered to perfection, my Royal is not a masterpiece by any means. The Royal Enfield has charm, I can still say ‘yep, my bike was hand welded and tooled’. My W650 is for going fast, my Royal is a all day bike. On long rides, nothing beats the Royal Enfield”. So the first question that popped into my mind was which bike he likes riding more, “if both bikes were cleaned up, and in perfect condition, I would jump on my Royal before the W650. It is a very simple, back to the basics, no frills kinda deal. It’s no big, expensive luxury ride with creature comforts to distract”.

Clay is one lucky dude. Not only does he own a Royal Enfield and a W650, but he also lives close enough to roll through the twisted sisters ride in the hill country at anytime of his choosing. “Not long ago I went on a 300 mile ride through the hill country. My Royal is so effortless. It’s a small, slow, and super fun bike to ride. You don’t get on a Royal Enfield expecting to go fast, I’m comfortable hanging back in the right lane letting cars pass as I take in the scenery”. Clay went on to talk about the funnest ride he has ever been on, “it had to been the trip from Fort Worth to Austin with my new full system D&D exhaust system. It opened the bike right up, totally rode different”. I bet the back roads from Funky Town Fort Worth to Keep it Weird Austin is pretty gnarly!

“My one word to describe the Royal Enfield experience would be Raw!”