From India to Texas 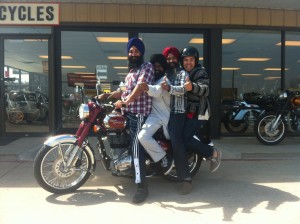 As we all know by now, the Royal Enfield’s have been manufactured in India since the 50’s and recently they have built a new state of the art facility in Chennai, India. If you were to move from India to Texas and find out there was a Royal Enfield dealer in your neighborhood, wouldn’t you want one? Especially if you had a Royal Enfield back home! Yuvraj and Krishanpal are two of the most sincere guys you will ever have the chance of meeting. I was lucky enough to make their dreams come true over 6 months ago when they both purchased a 2014 Royal Enfield Chrome and Maroon.

Now we have the unique opportunity to hear the differences and similarities between the 350 cc models in India and the 500 cc Royal Enfield models in America. “In India you only drive 25-35 MPH, this bike is not for going fast. This 500 cc Enfield wants to go faster but the 350 cc in India looks bigger”. The motorcycle culture is completely different in India compared to America. In India the motorcycle is a necessity, it’s your primary means of transportation, compared to in America where we use motorcycles as a luxury item. It isn’t out of the ordinary to see 4-5 on one Enfield in India, Krisanpal goes on to explain why; “The heavier, the smoother. More weight helps with the balance and power of the bike. It also beats walking”. Another big difference is how Yuvraj and Krishanpal share their motorcycles. Yuvraj was recently at a gas station when a man approached him asking about his Royal Enfield, without hesitation he threw the guy the keys to his ride, I can’t believe that! Apparently in India everybody shares their bike, my theory is that since it is a primary vehicle and most everybody knows how to ride keys are thrown around like hot cakes.

Interview with AJ & His Custom B5 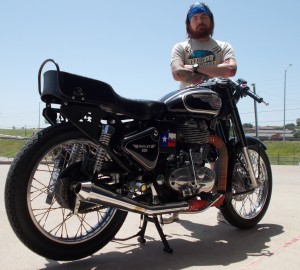 Andrew (AKA AJ) is another first time motorcycle owner, and yes, he chose a rad Royal Enfield. When he picked up his 2013 B5, a little over a year ago, it was bone stock. Andrew had big plans of customization- the possibilities were limitless! Just because this was his first motorcycle didn’t mean AJ hadn’t grow up around motorcycles. His pops used to built bikes out of his garage, bikes like Norton’s, Triumph’s, and BSA’s. So naturally AJ wanted “a classic look with reliability”.

Finally, AJ’s brand new 2013 Royal Enfield was in his garage! First step was to strip his new ride down to the skeleton. The rear fender was removed and a custom sidemount license plate was installed. The handlebars were flipped (later installed clubman bars), upsweep D&D exhaust installed with stage 1 breather kit, blacked a few chrome parts, and last but not least AJ had some custom number plate gusset’s cut and installed (#14 in the house). Future customizations include; replace or cut front fender, replace tires with dual-purpose, and shave seat to give it more of a custom café look. 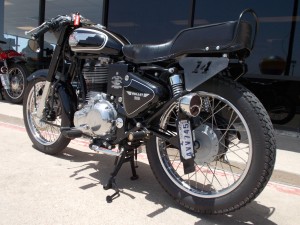 Obviously there are a lot of bike brands out there to choose from, AJ went on to explain how “A lot of research goes into buying a Royal because you don’t know too much about the company, or maybe you never have heard of a Royal Enfield. It’s not like buying a Honda, Triumph, or Harley- companies that you see and hear about everyday. The best part of owning a Royal Enfield is the bond between other RE riders, because we’re few in numbers. I will always keep my Royal, but I’m definitely going to buy another one in the future, perhaps a Triumph Daytona”. I’m hearing a common trend between these Enfield owners, nobody wants to ever sell their Royal Enfield, but they do want to add to the collection. When AJ was asked to describe Royal Enfield in one word, his quick response was “Perfect”. I look forward to seeing AJ’s B5 in the coming months, it’s a sweet ride! 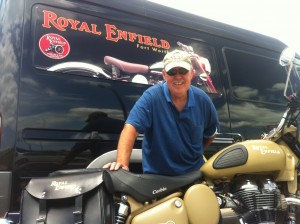 I had to get an interview with Paul after I saw him rocking a sweet Corbin seat on his 2012 Royal Enfield Desert Storm. I had no idea Corbin made a RE seat, very cool! If the stock seat is hurting the ol’ biscuit, then check out Corbin’s.

Once we sat down for an interview I got to find out a little bit about Paul’s riding style and how he likes the bike so far. “No dislikes! It reminds me of a bike I had in the 60’s, except this one runs all the time”. I love getting to hear stories from riders in 60’s and 70’s. “When I was a kid, my friends and I would go where the road ends. A lightweight bike with a lot of low end torque was ideal for the gravel, mud, and creek beds. When we were young, we were pretty stupid, Steve McQueen kind of shit!”.  I wish I could have been there for some of that riding!

The beauty of owning a Royal is that it reminds you of your first motorcycle while having the reliability of a brand new fuel-injected bike. When I asked Paul to describe the Royal Enfield in one word, he said “outrageous”! “The best part of owning my Royal is that it makes me feel like a kid again”- couldn’t have said it better myself. 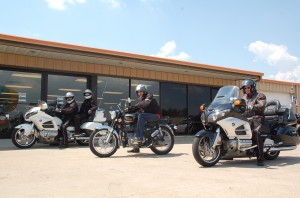 Recently a familiar face came through the shop for his 6,000 mile service. Kacey Close purchased a 2012 Royal Enfield G5 from Royal Enfield of Fort Worth 16 months ago and already has over 6,000 miles on his ride! This is the first 6,000 miles he has ever put on two wheels, and how nice that it was on a Royal Enfield G5, “I’ve really only ridden the Enfield, it was tough to separate ‘riding’ vs ‘riding an Enfield’. Riding is fun and exhilarating, but riding an Enfield is something timeless and classic. I feel like I’ve ridden out of a different era.”

It’s nice to get a perspective from a first time rider and from the biggest Royal Enfield fan in Denton, Texas. Kacey uses his Enfield as a daily commuter to work- what a great way to get you up in the mornings. Kacey feels that Denton and the Royal Enfield brand go hand and hand, “Denton maintains a small town feel, no matter how big it gets. The Royal Enfield isn’t a big bike, but get’s a large amount of attention and is perfect for getting around all of Denton”. When I asked Kacey for the one word to describe his Royal Enfield he said “I would say that ‘Exhilarating’ is my one word for riding in general. My word for riding the Enfield would be ‘Genuine’.” Couldn’t have said it better myself!

One of my favorite memories of Kacey and his Enfield is when he rolled up to the shop with a pack of Goldwing riders. The Honda Goldwing is pure 1800 cc touring motorcycle, and here is a 500 cc Royal Enfield hanging with these boys on the highway! How awesome is that! Kacey couldn’t be happier with his decision to ride a Royal. He might get another bike in the future, but he will never get rid of his first motorcycle. Congratulations, Kacey!

All I can say is YES! Anthony recently sat down with me and brainstormed a new motorcycle design he’s been searching for since he sold his first motorcycle at 19, a Honda CX500. I can honestly say that we hit the nail on the head with this one! We took a 2014 Royal Enfield C5 Military and converted it to a one off Café bobber. 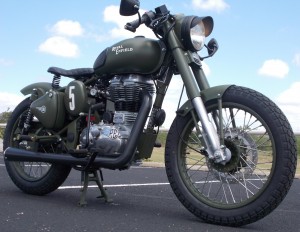 This custom is packing custom dual-purpose tires, full D&D exhaust system, café bars, side-mount license plate, Biltwell seat, and not to mention everything that was chrome has been power coated black.

Anthony wanted something no one has, something completely personalized to himself, an efficient bike with a classic look. Anthony has an “old soul” that was begging to be set free! He’s from a small town with plenty of back roads to ride this hot rod. 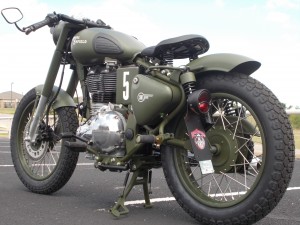 Immediately after getting it on the road he noticed how many crazy looks he was getting. “I can’t go anywhere without people gathering around me asking what year my bike is, or how long did it take to restore. It’s something I look forward to after work, it’s therapeutic for me”. 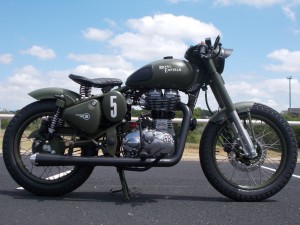 It didn’t take him long after researching the brand to see an opportunity with Royal Enfield, “I’m an entrepreneur and with a lot of people not knowing what a Royal Enfield is, there is huge potential for this brand to grow. Any company that has been around for 113 years, obviously knows what they are doing and has mastered the product”. Anthony is the only one in the world with this exact setup, configured exactly to his liking. It’s like owning a piece of you that expresses and symbolizes who you are. I could barely get Antony off his bike long enough to get this interview. Ride on Buddy! 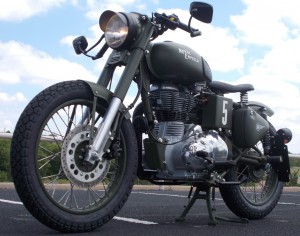 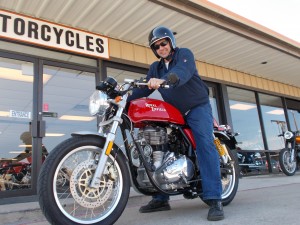 We had the unique opportunity to interview a customer who jumped off a 500 Bullet to the new Continental GT. It’s interesting to hear the differences between the two models straight from the source. David explained to us how light and responsive the GT is, packed with the newest technology, “it’s a completely different bike from the other RE models”. He goes on to explain how “the GT still has the retro look and feel while offering more confidence in the corners and at highway speeds”.

David has a pretty simple method for picking his motorcycles and cars, “It’s more fun to drive a slow vehicle fast than drive a fast vehicle slow”. He is the perfect candidate for the Royal Enfield motorcycles; David finds the simple things in life, the things that slow you down in a culture that is moving so fast- “You can see the world with only 22 horse power”. I think David is in good shape with the Continental GT packing 29 hp, especially with it only weighing 403 pounds.

When we asked David to describe the new 2014 Continental GT in one word, his word of choice was “fun!”. 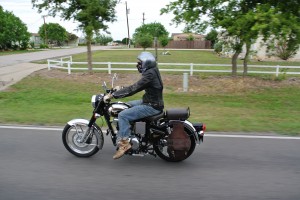 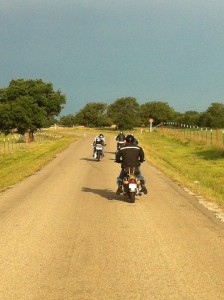